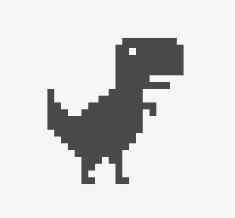 The T-Rex dinosaur game is popular among players from all over the world. That's not everyone guesses that it can be 'revived'!

Probably, many saw a picture of a dinosaur on their smartphones, laptops, or computers in the Google Chrome browser. You need to click on the image, and the dinosaur will start running forward.

How to play Dinosaur Google Chrome

To start, you need to press the spacebar or the up arrow. The same buttons are used to jump. You can crouch using the down arrow. On mobile devices, all you need to do is touch the screen.

Rules of the game

The player's task is to score as many points as possible. The speed increases over time, and the days will change into night. Dinosaurs are waiting for obstacles that you need to dodge. If the player accidentally encounters them, they will automatically die, and the game will restart. And so it goes in a circle.

Google created the game in 2014 for the Chrome browser. It appears when users have opened a browser without an internet connection. The goal is to pass the time. A Chrome engineer named Edward Jung noted that the T-Rex dinosaur is launched more than 27 million times every month!

The main character is a pixel dinosaur. But why was it not a little man or a turtle that became the hero? Chrome designer Sebastian Gabriel explained that the game invites the user to move to a prehistoric era when no one knew about the existence of the Internet. It turned out very symbolic.

Each player has their record, which can be seen in the upper right corner. If the user has received 300 points during the first game, then this number will be considered his record. If the player scores more points in the future, then the record will increase.

It seems like it could go on indefinitely. The creators note that they set a specific limit, taking about 17 million years to complete the game, approximately as long as dinosaurs existed on Earth.